Posted on October 2, 2020 by cartarchaeology 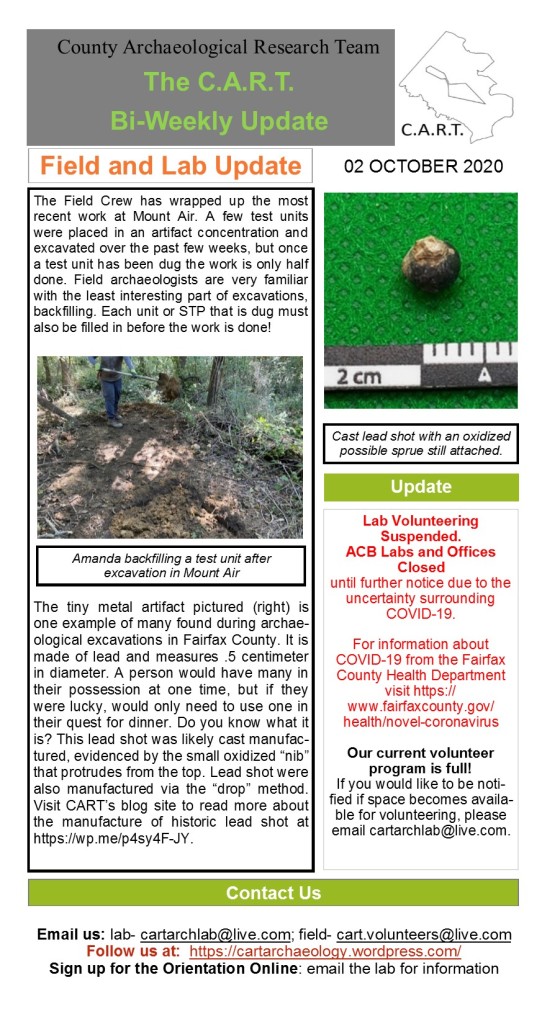 Posted on September 25, 2020 by cartarchaeology

Virginia archaeology lost Jack Hranicky on August 4, 2020. In addition to his military service, and his career with the Departments of State and Defense, Jack is best known for his passion: Paleo-Indian archaeology in the Mid-Atlantic and Eastern United States. Jack received his undergraduate degree from Virginia Commonwealth University and did graduate work at University of Oklahoma. He would later teach anthropology at Northern Virginia Community College and St. John’s College High School in Washington, DC.

Jack participated in nearly fifty excavations (Hranicky 2020) over forty years. He was principal investigator for six of the sites excavated, including the Tanner soapstone site in Brunswick County (VA). He published twenty-five books, mostly on the topics of the material culture, lithic artifacts, and prehistoric tool technology of the Paleo era (Amazon 2020). He also published more than two-hundred papers, ten of which are currently available on Research Gate (2020) and include the titles Bifaces as Knives, Toolmaking Technology, and Artifact Caches. He was also the editor and publisher of the original monthly magazine Popular Archaeology (Terping et al 1974).

During his career Jack served on the boards and committees of the Archeological Society of Virginia (ASV) and the Archaeological Society of Maryland (ASM). He served as President of the Eastern States Archaeological Federation (ESAF) from 2004 to 2006, was ESAF’s Bulletin editor from 1986 to 1993, and was the foundation’s Web Master until 2005 (ESAF 2017). He was also a member of the Council of Virginia Archaeologists (COVA) and the Society for American Archaeology (SAA) (Hranicky 2020). Jack also ran the Virginia Rock Art Survey (rockart.va.org 2020) and the former Ben C. McCary Virginia Fluted Point Survey (PIDBA 2020).

In case he ever found himself with nothing to do, Jack was an active member of the Alexandria Radio Club – handle K50TZ – and served as Club President in 2009 and 2010. He served as the Chairman of the club’s Field Day events for several years. He was also a Range Safety Officer at the Arlington-Fairfax Chapter of the Isaac Walton League in Centreville (W4HFH.ARC 2020).

Jack Hranicky was scheduled to speak at the 85th Annual Meeting of the SAA in Austin, Texas this past April. He was prepared to deliver a paper on the Reexamination of the Paleo Site in Virginia (SAA 2020), but due to the pandemic the meeting was cancelled. He was hospitalized for an intestinal infection the beginning of August and died at the age of 79. Jack is survived by his wife, Juliet. His knowledge of material culture and contributions will greatly be missed by the archaeology community.

Posted on September 11, 2020 by cartarchaeology

Have you ever taken a look at the Fairfax Parks Instagram? If not, we recommend that you do. At times, you can even spot photos of artifacts from our archaeology collection. The three photos below were recently featured. For more information on each photo, go to https://www.instagram.com/fairfaxparks/ or click on one of the images. 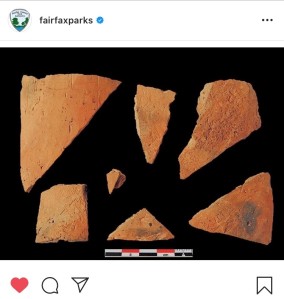 Posted on August 14, 2020 by cartarchaeology

Take a look at the two photographs. Can you spot some differences? One photograph depicts two projectile points, a biface fragment, prehistoric ceramic sherds, and quartz and quartzite flakes from making stone tools. The other photograph shows a brick fragment, a pearlware ceramic sherd, a bottle glass fragment, and probable pieces of corroded nails. The significant difference in these photographs is not how exciting the finds are, but instead, the time periods from which they were created. Would it surprise you to know that these artifacts came from the same site? While from vastly different time periods, these artifacts did come from the same location. When this occurs on a site, archaeologists call the site a multicomponent site. This shows how, despite differing cultural lifeways and changing environment, people across time found certain locations favorable for habitation.

Posted on August 13, 2020 by cartarchaeology

Posted on August 1, 2020 by cartarchaeology

As we continue to work from home due to the Covid-19 pandemic, we find that we miss our volunteers more each passing week. Knowing that we currently cannot accept the help they so willingly offer – and that it is likely to be a long while before we can – we have decided to continue sharing the stories of the wonderfully talented volunteers that lend their time and efforts to the Archaeology and Collections Branch (ACB). Our volunteer in the spotlight this month is Aidan Morse.

Aidan is an Archaeological Volunteer Assistant. He has been assisting the County Archaeological Research Team (CART) since June of 2015. He has assisted staff both in the field and in the lab and has donated more than 1,180 hours of his time in just the past two years. Aidan has often volunteered two to three days a week. His work recovering and processing thousands of archaeological artifacts will aid CART in the interpretation and preservation of Fairfax County’s history.

We asked Aidan what sparked his interest in archaeology. He stated that “reading novels about archaeology in high school” fueled his curiosity. “I like that I get to be outside and search for clues to the past.” When volunteering in the field, Aidan assisted the crew with excavation and screening for artifacts.

Aidan describes the tasks in the lab that he was most often asked to do as “washing, weighing, and rebagging artifacts.” He was also tasked with adding artifact weights to the catalog. We asked what his favorite part of volunteering was, and he replied that he “most enjoyed talking to the others in the lab.” We appreciate and miss these intellectual –  and often entertaining – conversations, too! We found that we often learned as much from our knowledgeable volunteers as they did from us. He noted that he has “learned that, where I volunteer, most of the artifacts are nails.”  He never fails to make us smile. (Thanks for weighing the nails, Aidan!)

We asked Aidan what makes volunteering with FCPA rewarding for him. He replied, “It gives me a sense of purpose greater than myself.” This is the selflessness we see in all our volunteers. We greatly appreciate their time, energy, and talents and admire their dedication to CART’s mission. Thank you, Aidan.

Aidan says he does not volunteer anywhere else, which makes us even more grateful that he chooses to spend his time with us. Since that cannot happen right now – and most likely not until next year – we were curious as to what he has done to keep himself busy. Like many of us stuck in our homes, he feels that he has “struggled and failed to do so.”  We are sorry to hear this but want him to know that when it is finally time to return to the lab, we will have plenty of nails (and other artifacts) for him to weigh!

Although it may be quite some time before we see our volunteers and even longer until we have a volunteer slot available,  if you are interested in being added to a wait list to apply to our volunteer program please contact us at: cartarchlab@live.com. We will be happy to send you an invitation when orientations resume.

One of my favorite artifacts is a type of ceramic called Jackfield. Jackfield-type ceramics are unique in that they feature a dark red, purplish, or even a gray refined earthenware body with a lustrous black lead glaze, usually covering both the inside and outside of the vessel. These vessels could feature some decorative aspects, including molded designs and gilding, although they were also frequently left plain (MAC Lab 2012). The vessels themselves were thin walled and often were tea wares, such as tea pots, or pitchers (Hume 123). Oftentimes, these wares featured decorative molded handles and spouts (Aultman et al. 2003, 46).

Jackfield was produced with a lead-glaze. This meant that the potter added powdered lead to the ceramics glaze before firing it in the kiln. The lead provided a smooth, non-porous surface that allowed vessels to be water tight (Lakeside Pottery). Additionally, many pieces of Jackfield featured decorative elements including oil-gilding. Oil-gilding meant that an oil, commonly made from boiled linseed oil, was applied to a vessel. It was then left to dry in a dust-free environment until the oil achieved the proper tackiness. Gold leaf was then hand-applied to the tacky oil. Many beautiful designs were achieved using this (Bernacki & Associates, Inc.).

Jackfield was originally produced in England in the 1740s, although it was not popular until around 1750 (MAC Lab 2012). Jackfield was being produced in the 1740s and 1750s by Thomas Whieldon in Staffordshire, England. Whieldon’s Jackfield tended to have a redder body and a brighter black glaze. The Jackfield Pottery, a shop founded in Shropshire, England by Maurice Thursfield in 1750 also produced this ware. This ceramic type is common to early American sites that date to around the 1760s (Hume 1969, 123). Jackfield declined in production by the late 1700s, although low quality replicas continued to be made into the early 1800s. Since this time period, several replicas of this ceramic type have been made, including during the Jackfield revival period during the 1870s and 1880s.  The revival Jackfield products, however, tended to be a black glaze over a thicker terra cotta or white earthenware bodybody. This revival Jackfield is sometimes referred to as Jet Ware (MAC Lab 2012). 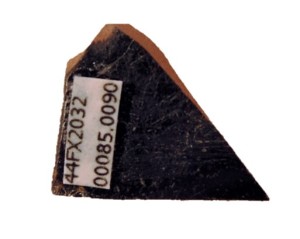 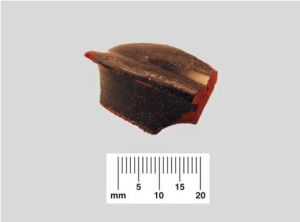 Posted on July 6, 2020 by cartarchaeology

For the holiday weekend, in our area, you may have found yourself putting on shoes for the first time in a long while. This shoe buckle was excavated from Old Colchester Park and Preserve and is one that may have been worn around the formation of the United States of America.

One of the sites on the park and preserve is the colonial port town of Colchester. During the American Revolutionary War, the Continental Army and the Expédition Particulière marched along a series of routes. The Washington-Rochambeau Revolutionary Route is now 680 miles of roads designated as a National Historic Trail. A bit of this route traverses through what was once the town of Colchester. The ferry at Colchester provided a crossing point for troops over the Occoquan River.

We hope you enjoyed your holiday weekend while social distancing. Stay safe! 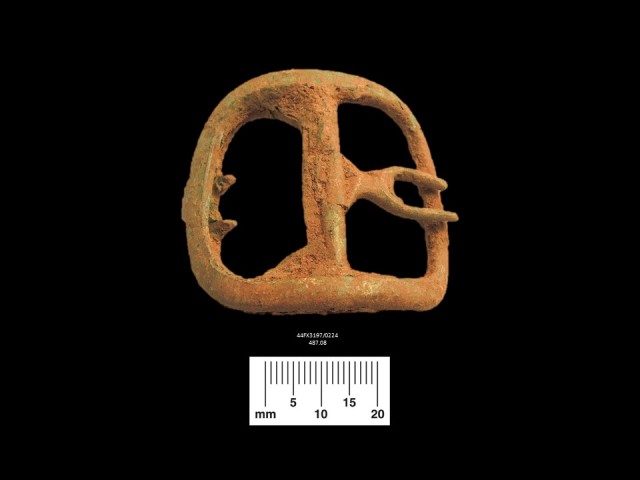