The History of the Straight Pin

Posted on October 28, 2016 by cartarchaeology 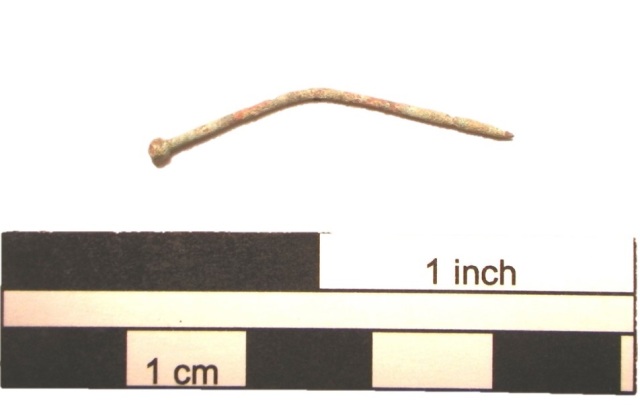 The straight pin has been seen universally for centuries, and although its function has remained relatively the same, the process in which they are made has progressed and streamlined. The straight pin is known mainly for its role in sewing as a small, thin piece of metal used to temporarily hold two pieces of fabric together. The pin has been made out of many different materials like metal, bone, and even wood [1].

In Ancient Rome, pins were elaborately handmade and often worn in the hair or to hold two pieces of clothing together. During the renaissance in Europe pins were often made from iron, brass, or copper wire and the remnants of their manufacture have been found on many sixteenth and seventeenth century archaeological sites in London and parts of France [2]. Wire pins produced in both America and Europe in the nineteenth century can be found on archaeological sites across the East Coast. They can be indicators of a domestic or residential area. Handmade straight pins can suggest an early time period for a site in North America.

The process of hand making metal straight pins is a complicated one, often with up to 18 separate steps to produce the small pin [3]. Each pin would have been handmade individually and involved the use of tools such as the “pin maker’s peg” or the “Pinner’s bone” to help achieve the pointed end of the pin. This tool was made from a small thin animal bone with groves carved into it to prevent the pin from losing its straight shape as the end was being sharpened into a point. These tools are usually identifiable today by the green color from the copper wire residue as well as the diagonal file marks left in the bone by the sharpening process of the pins.

The head of the pin was made from another piece of wire of a similar diameter to the rest of the pin. It would then be coiled around the body of the pin and moved into place, referred to as a wound head.  This often produced inconsistent sizes and shapes for the heads and left them sharp enough to catch on the clothing of whomever used it. This inconvenience led to the practice of stamping the head of the pin into a flat or ball shape from the same piece of wire from the body of the pin and ended the practice of coiling a second wire.

Before the seventeenth century this process was expensive and meant that metal straight pins were privy to the wealthy as it was not a viable industry until a later time. By the mid-1700s pin making was one of the most important industries in Gloucester, England. Wire straight pins were a common export of these factories, especially to the English colonies due to high demand. There were attempts to produce straight pins in the colonies through small mills up and down the east coast after the American Revolution. Because most mills were still producing each pin by hand no operation was truly successful until the mid-1800s and a full-fledged factory was not created until 1836. Before the introduction of the mass produced wire pin, factories were still producing each pin by hand and were only able to produce around 5,000 straight pins a day.

Many inventors during this time began to design and patent machines to mass manufacture pins, one example being the Howe Manufacturing Company of Derby, Connecticut formed by John Ireland Howe in 1836. Howe’s factory was able to produce upwards of 70,000 straight pins each day by producing each pin from a single piece of wire that would have the head stamped flat rather than using the coiling process. This made the purchase and use of these straight pins even more common and affordable than in prior years [4]. Straight pins are not gender specific items as they were used by both men and women in clothing, hats, and even wigs when needed. Their presence can always suggest their proximity to a domestic location as this was where they were often used and stored, or thrown out when broken or bent [5].

The straight pins found by our archaeologists and volunteers were recovered from Colchester Park through the process of water screening. This allows very small artifacts to be recovered that would have otherwise gone undocumented and can give a more complete picture of the activities that took place in this historic site.

We are the County Archaeological Research Team, part of the Archaeology and Collections Branch, Resource Management Division, Fairfax County Park Authority. We are tasked with understanding and managing the cultural resources on Park land throughout Fairfax County.
View all posts by cartarchaeology →
This entry was posted in Artifacts, Uncategorized. Bookmark the permalink.

3 Responses to The History of the Straight Pin